The Society’s Awards are the Galleghan Award, Gold Medal, Silver Medal, Bronze Medal, Certificate of Merit, Letter of Commendation and the Sir Neville Pixley Award. The latter is a special award to recognise bravery by a young person in the performance of a humane act. 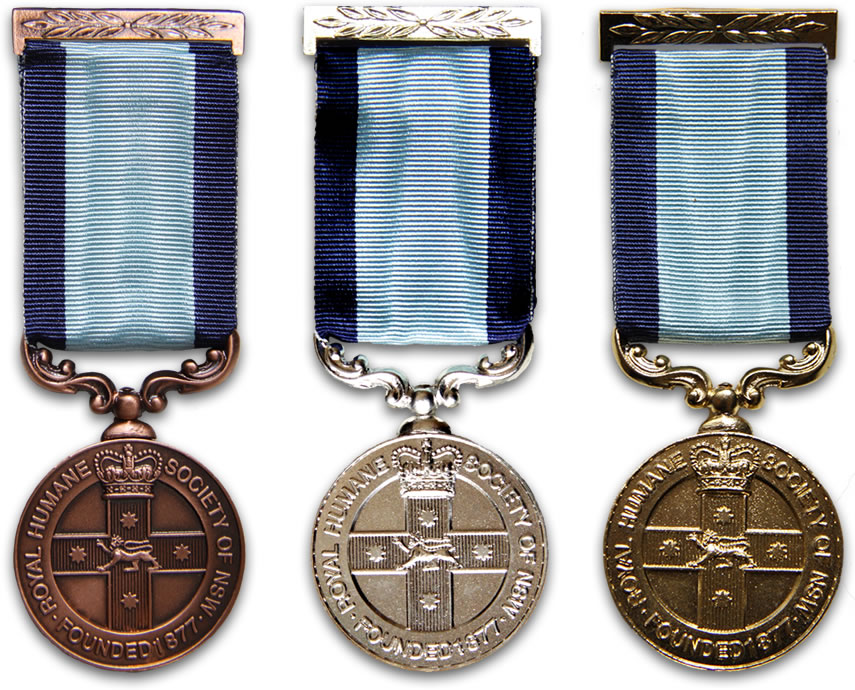 The Galleghan Award, instituted in 1996, recognises the most outstanding act of bravery in the year.

It is designated by a bar reading “Galleghan Award” affixed to the ribbon of the medal award.

The winner of the Galleghan Award is nominated by the Society for consideration to receive the Stanhope Gold Medal.

The award is named after Brigadier Sir Frederick Galleghan DSO OBE ISO ED, who was the Society's Secretary from 1958 - 1971. Sir Frederick was twice wounded in the Great War, and was awarded the Distinguished Service Order in the Second World War for his leadership and gallantry when commanding the 2/30th Battalion at the battle of Gemas in Malaya.

The Stanhope Gold Medal, which is an award of the Royal Humane Society (England), was instituted in 1873 as the English Society’s highest award for bravery each year. In 1962 all kindred Commonwealth Societies were invited to nominate each year their best cases for adjudication for this Award.

Since that time, nominations by the Royal Humane Society of New South Wales have been successful on twelve occasions:

The ribbon for all medals is light blue with a strip of dark blue on either side.

The Certificate of Merit is a scroll bearing the Arms of the State of New South Wales. It is inscribed with the recipient’s name and the brave deed and it is signed by the President and Chair.

Recipients of Medals are entitled to wear the medal or ribbon (as appropriate) on the right breast.  When only the ribbon is worn, a silver or bronze star emblem is worn centrally on the ribbon to denote the class of medal awarded to the wearer.  Such wearing is officially authorized for the members of all uniformed services.

Recipients who may not wish to wear their original medals or who may wish to wear their medals Court mounted may purchase replica medals by completing an on-line request form on the Society’s web-page. The purchase of additional ribbon for repairs or Court Mounting or the puchase of additional Lapel pins  also can be made by completing an on-line request form available on the Society’s web-page.

Lost or stolen medals may be replaced to the recipient after appropriate investigation.